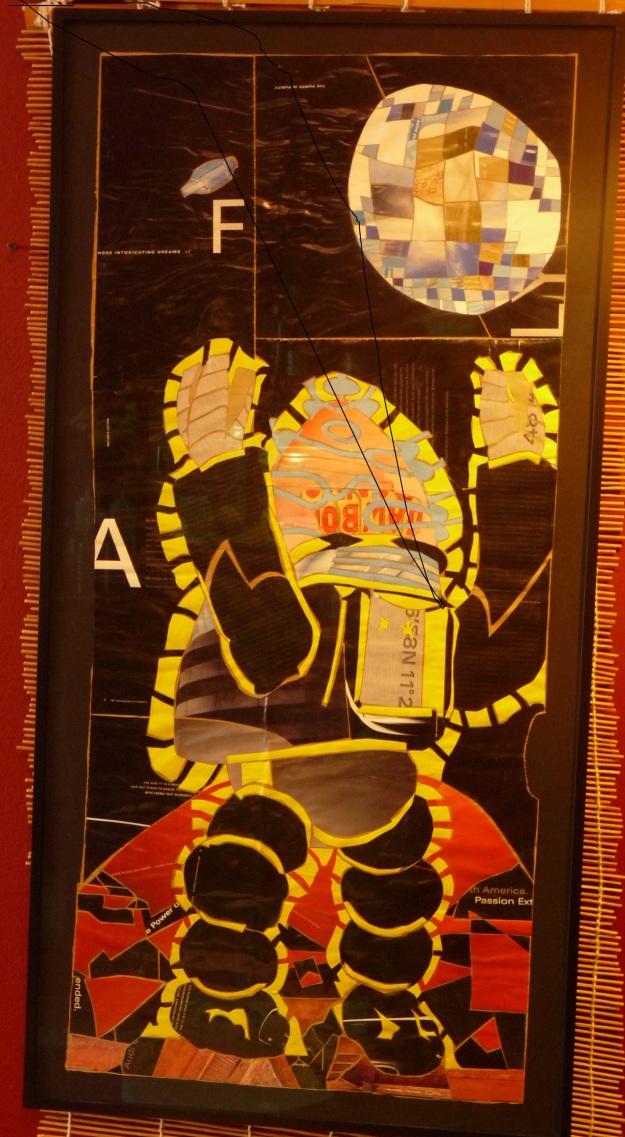 In, The Origins of Consciousness in the Breakdown of the Bicameral Mind, Julian Jaynes elaborates a theory on the nature of pre-modern consciousness, the bicameral mind. At this point in human consciousness there was language, but people didn’t have the power of self narration… they couldn’t say, yesterday I did this, tomorrow I will do this, I am doing this. The skills necessary for survival had been accumulated slowly and passed on thru mimicry. The chief or king would impart commands for the activities necessary for the maintenance of the community attending to crisis in the manner passed down from the previous generation. The theory suggests that totems were used to aid the king in attaining a meditative trance to experience an auditory hallucination of the advice imparted by the previous king for this maintenance and meeting crisis… that as populations grew, communities began to bump into each other, resulting in conflict and war, something new in the experience of these bicameral kingdoms. Previous to this, carved reliefs would show the king beseeching a deity seated in a throne; at a certain point these carvings show the king before an empty thrown. With the new crisis no amount of meditation would produce a solution… god had abandoned them. In such breakdowns like that experienced by the Assyrians… these societies became paranoid and desperate with fear. Carvings show the king holding lions suspended by the tail as trophies. No doubt having experienced atrocity they learned to wield that fear and capacity for atrocity to meet these new challenges.

Living in Englewood I saw the same pattern starkly, and gained the sight to see its more subtle manifestations elsewhere. The fruits of our society are paraded before all, but on the street in Englewood, the gods have gone. There is no answer to the question, ‘how do I get there from here.’ Instead, there is gratuitous violence, intimidation and humiliation. Fear rules, intimidation becomes the primary tool to meet challenges until it falls short of the purpose and violence becomes necessary. Life becomes a reaction to that fear and threat, but these survival strategies don’t unlock the promise of the greater society they only trap their adherents in smaller and smaller backwaters. The only ones benefiting being our living steles, celebrities–and the industries which produce them–pushing these dead-end survival strategies.

Collage intended as a gift for Father Pfleger… Will keep showing it till either he claims it or I get a chance to offer it to him. 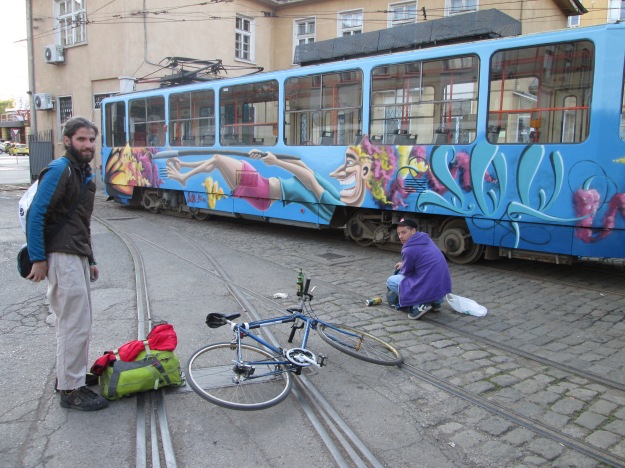 Travelling through eastern Europe–early June 2014–my fellow traveler and I came upon these muralists decorating a tram car. They were two of a group of artists whose work we had seen all over the city–works large and small. We stopped and spoke with them and found that their work was encouraged by the city, that a ‘zona cultura’ had been established to cultivate their brand of civic pride. These street-cars are perhaps a grand if poor representation of the full extent of their efforts. Utility boxes, an obtrusive 2 1/2′ x 3′, appear frequently on the sidewalks–front of buildings–in spite of any aesthetic sensibility. Until, that is, these artists got at them. The number, variety and nature of these mini murals brought the street level city-scape a stride further from the slum and closer to the garden. What better role could an artist hope to perform? http://blazingbulgaria.wordpress.com/2014/06/06/graffiti-art-graces-sofias-classic-trams/ 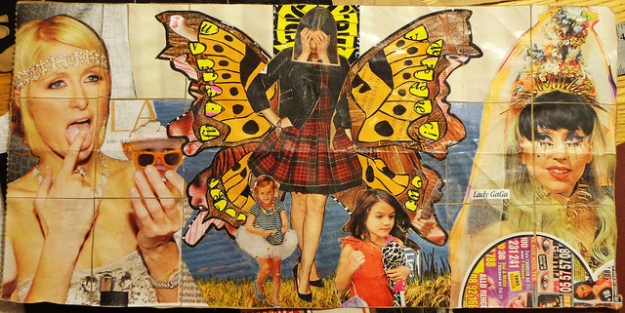 ~2010… Done from one French celebrity magazine brought back from France by a friend of a friend who passed it on to me specifically for use as collage material.

I am always on the look out for potential collage material and the best is that donated from people who appreciate my work. There is no telling what may be useful. I can be contacted via post for donations.

This was inspired by the work of Henry Darger–an artist from my home town of Chicago. He actually worked as a janitor at the orphanage where my father spent some of his youth. I was aware of his work, but it was brought to mind by the band Vivian Girls.

This piece is intended as a gift for the lead singer, Cassie Ramone… I just haven’t had the opportunity to pass it on to her–so I intend to keep showing it till she claims it.

At the time of this posting it is hanging at the Coffeehouse in downtown Normal, Illinois.

Finished in December of 2013, started in 2010. Vlad Tepes, from a German notice circulated against the Romanian Warlord–who brutally suppressed German mercantile expansion into his land.